Outhouses are basic Americana from which much can be learned  about our basic culture. We have properly restored and documented many. Let us help you appreciate one you may own or have access to for an historical evaluation. If desired, I will provide a  quotation for restoration, rehabilitation or replacement.

I can also replace one which has been long gone with a properly built new structure. 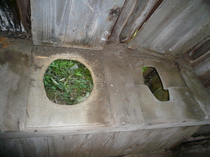 A good sized seat next to a long narrow one charecterized this kybo.

This very early 20th century was built with no frame. That was corrected after it was rebuilt & restored. 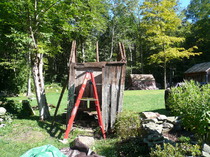 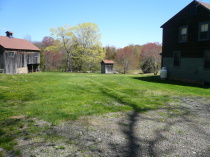 Although rebuilt at times, this Westchester, Ct. thunder box contains elements dating back to 1736. It is located along a direct road midway between Gen'l Rochambeau's  hussar camp from Lauzun's Legion and the Marlborough Tavern where Gen'l Washington is said to have stayed. 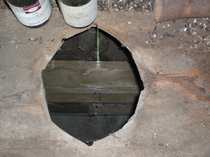 Typical 1700's seat from a surviving 1736 privy. Note the multiple auger holes along the circumference which the builder used to inset a key hole saw to complete the job.

The Outhouse "Moon," Crescent, whatever

(Read this or go to the "about the moon - crescent" page)

Rustic carpenters cut out a shape in which a person could place their hand as an equivilant to a doorknob. Expensive metal hardware was used on more "important" structures.

Contrary to the belief of some, the crescent was not originally used to symbolize Luna, the moon goddess for an illiterate population to designate women's outhouses. The colonials were very literate having grown up reading the bible and attending school; at least in their early years.

Newspapers flourished throughout the colonies and Thomas Paine's "Common Sense" is said to have sold 500,000 copies in the first year of publication alone to a population of less than 3 million. Many more were sold after.

Besides; democracy is a hallmark of educated populations.

The rustic crescent became associated with the jakes which pretty much identified it even after hardware became cheap and plentiful, so folk just replicated it somewhere on the newer ones as a sign of the structure's purpose. This has sure confused lottsa modern folk when this basic no nonsense function became a signature element of the American privy and was placed anywhere on it for identification purposes.

As rustic carpenters became scarce , folk just plain forgot & were unable to find someone who could explain why the cutout was there so they made up some mighty creative stories. And besides what homesteader would build a seperate male and female thunder box  on their farm. Wouldn't make sense to these practical hardworking folk.

The original purpose of the crescent was simply as a door knob as is true even today in certain rural populations.

I suppose you can make it to symbolize anything you want, so if ya wants that to be a necessary for ya moon goddess; so be it. But that ain't why it was there to begin with.

Need to know something about old Kybos? Ask an old timer with a real mind. What does a hand-held plastic brain know about using an outhouse? 'Cept, in my opinion, should be thrown down the pit.

Unfortionatly original "moon" cutouts cannot be found these days on older privies because over time, necessary repairs to the door eliminated the need to use this old time practicality.

I restored the historic 1850's Millington schoolhouse privy (as well as others.) After completion, the local authorities done painted it inside & out the same barn red so it's tough to see the restored detail inside.

Don't Care To Be On Nor Should You Expect To Find Me On Facebook, Twitter or Any One O' Dem Silly "Social" Sites.